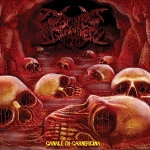 It’s still 2015 and this Swedish / American joint venture already vomits another pile of pus and gore. But what has happened? Until this release BONE GNAWER stood for gore soaked, blood drenched, horror infested Death Metal with that one unmistakeable voice and some Swedish ingredients to spice up that deadly feast. Well, Kam Lee is still recognizable after a few seconds, but I’m not quite sure what to think of the musical performance on here. " Canale Di Carneficina" has been advertised as the last release featuring former member Rogga Johansson and right that fact seems to be the most reasonable weak spot of this MCD. The four songs just sound as if they had not been good enough to be released at all, but even good enough for some label to release them anyway to cash in some extra bucks. And I bet there will be enough "collectors" out there, that fall victim to this name dropping, since they would buy everything that features the works of Mr. Johansson, even if it would be some Polka tunes or right this more than mediocre and doubtful release. I wouldn’t complain at all, if the containing tracks would have been some un-released stuff from former recording sessions, but still with the same quality aspect, like songwriting and sound. But "Canale Di Carneficina" has been granted with an awful sound and utterly shitty programmed drums. I just don’t get it; BONE GNAWER has that skilled and talented guy Morgan Lie in their ranks, who already bashed the skins in NAGLFAR, but decide to release a MCD with a drum computer? C’mon guys… I really hope that this has been a one-time mistake that’s not gonna be repeated again. Alright, all those obstinate ghouls gonna buy it anyway, but to the rest: I suggest you to check out the previous releases of BONE GNAWER; that band is far better than they appear on that release! And don’t forget to check out THE GROTESQUERY (another corporation between Kam and Rogga) or even the other playgrounds of that Swedish jack-of-all-trades, like PAGANIZER and RIBSPREADER. And don’t you forget to listen to the sounds "From Beyond"! Get your kicks at: www.facebook.com/bonegnawer, www.metal-inquisition.de