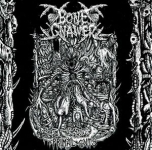 With BONE GNAWER, we have another musical playground of Mr. Kam Lee and Mr. Rogga Johansson. Yes, it’s the same combination of veterans that makes up THE GROTESQUERY as well. But unlike them, this band has a completely different approach to Death Metal. BONE GNAWER won’t tell you horror stories based on ideas of H.P. Lovecraft and E.A. Poe, they tell you all about zombies and cannibals. Classical lyrical themes of Death Metal, of course. And thus the simple musical intonation fits perfectly to the the simple lyrical approach. Grindcore styled riffs meet mostly midtempo drumming, spiced with some double bass drums. All these ingredients are packed into not too long songs, making the music pretty catchy. “Primal Cuts” is a compilation with some material of the band, some known, some unknown. We find the cool tracks from the “Scissored" 7" EP from 2010, that includes the hits ‘Back To The Butchery’ and ‘Leave Her To The Cleaver’. Also included is the material from the split MCD with BONESAW that can’t keep up with the first three songs, maybe due to being a little too monotonous in the riffing in some moments. Yet ‘And Now The Terror Starts’ is another smash in the face. Two more known songs are the two exclusive songs from the "Carved" MCD (“Scissored” being re-released here for the first time) who lack a little bit in production. Additionally, these two are not the best BONE GNAWER songs anyway. What makes “Primal Cuts” an interesting release for the real fans and connoisseurs of the band, too, are the four unreleased tracks that close the album. I can’t tell you anything about the circumstances of these recordings, yet they all seem to be from the same sessions. These songs are a little more based on Death Metal, mainly Floridian Death. Yet they are BONE GNAWER as fuck, so it’s not a bad idea to check out ‘Beware The Cross’ or the neatly repulsive ‘Eat Or Be Eaten’ with its perverted Kam Lee grunts. And ‘Zombies Vs Cannibals’ unites both lyrical favourites of the band with a song that has the qualities of early CARCASS. It’s only the final ‘Cannibal Cravings (Attack Of The Face Eater)’ that is not as fine as the other three new songs. Yet, there’s much fun for fans of grinding Death Metal on “Primal Cuts” and a nice way to check out this band as well. Do so at www.facebook.com/bonegnawer or visit the label at www.facebook.com/pages/ablaze-corp-black-saw-recs/134853466567950