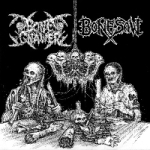 Two hungry and rotten bands who have more in common than their slightly similar names, namely performing brutal and heavy music! BONE GNAWER, which takes care of the first half, will be familiar by most of you by now. If not, in short: this is a Swedish Death Metal band featuring two well known figures in the underground: PAGANIZER’s (and tons of other bands / projects) Rogga Johansson on guitars and Kam Lee from MASSACRE on vocals. But also(!) Morgan Lie from NAGLFAR on drums and Ronnie Bjornstrom (RIBSPREADER e.a.) on guitars, who of course deserve as much credits as their two comrades. They already released a full length this year on Pulverised Records called "Feast Of Flesh". The three tracks on this split ‘And Now The Terror Starts’, ‘Cannibal Confessions’ and ‘Hacked-N-Slashed’ are brutal, simple and compelling. Ranging from slow to midtempo, with a vibe that had my head nod easily. Not really catchy riffs but decent and most of all brutal. Something I’ve experienced more with Mr. Johansson’s style lately. All three have this same crawling, sleazy and grinding monotonous formula. In ‘Cannibal Confessions’ it’s almost too repetitive (I expected a brutal blastbeat after each break… which never came) but in ‘Hacked-N-Slashed’ it works! The production is thick and heavy. Kam Lee’s vocals are very enjoyable! Brutal and deep with some sick draws and double layers. Well done and good to hear his typical, marvellous growl. They fit perfect to these tunes and definitely add that extra edge to them that probably no one else can. Musicwise cool and fitting in the line of latest RIBSPREADER, PAGANIZER, MAIM and likes. On to the second half. BONESAW from the UK already released two EPs and a split with ABSCESS. Most members are part of FESTER (UK) and ABLACH. Their three tracks have some sort of Crust/Core vibe especially in the last two. More energetic (but less suffocating) than the BONE GNAWER marterial and they both fit well together on this disc. ‘Voices From Within’ reminded me of MACABRE, BENEDICTION, while ‘Filthy Christian’ and ‘Behind The Glass’ brought up THE RAVENOUS, EXTREME NOISE TERROR on some levels. Quite a variating comparison but that’s what BONESAW offer in these 9 minutes. Two quality bands stuck in a room with each other, like in a scene from a SAW movie. But instead of killing each other they would probably both be having fun slashing and cannibalising Jigsaw. Don’t know any price, but check www.myspace.com/bonesawuk, www.aphelionproductions.net.