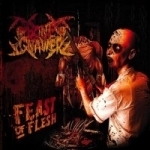 Some call him enemy, some call him friend, but like it or not, Kam Lee’s role in Death Metal history should remain uncontested after the good work he’s done with MASSACRE. After he left DENIAL FIEND, Mr. Lee apparently wasted no time in keeping himself active. BONE GNAWER, his latest (and possibly best after DENIAL FIEND) is not so much a band as a blood-drenched partnership between Swedish veterans Rogga Johanson (EDGE OF SANITY), Morgan Lie (NAGLFAR) and Ronnie Bjornstrom (RIBSREAPER). Having a composition that’s 75% percent Swedish, it’s really no surprise that “Feast Of Flesh” sounds like a modern Swedish Death Metal album. However, the album, it should be noted, only sounds modern. Analog studios are a thing of the past, but old school songwriting is not. The riffs these four men present are mid-paced, accompanied by plenty of D-beat and double bass. In other words, the songs are not super sonically fast, which means there’s more room for character, something technical music lacks. As an added bonus, guest appearances are made by Killjoy of NECROPHAGIA, Stevo of IMPETIGO and Dopi of MACHETAZO. www.myspace.com/bonegnawerband