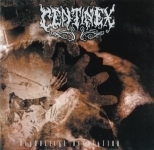 The CENTINEX guys have always been delivering first class Death Metal ever since their origin way back in late 1990. From a kinda immature, yet very cool sounding, typical Swedish old school Death Metal act in the tradition of vintage CARNAGE / NIHILIST / DISMEMBER up till now they slowly but surely developed themselves into a tight unit of sheer brutality. As a result CENTINEX anno 2002 musically do sound a lot closer to many bands of the so called new wave of Swedish Death Metal, but without denying their roots completely. Ever since Johan Jansson joined CENTINEX in 1998’s the vocals more and more developed into the aggressive thrashy direction, away from the typical Death Metal grunting of original singer Mattias Lamppu, who fronted the band up till “Reborn Through Flames”. I wouldn’t necessarily consider myself a fan of this evolution, as there’s way too many soundalikes around already, but gotta admit that “Diabolical Desolation” is still strong enough to please old and new fans alike. The majority of the material comes across very modern sounding, with many elements that the newer Swedish bands got popular with, but every now and then the old school influences impressively shine through… And that’s exactly the type of combination they should continue on with in the future! This mixture of shredding low tuned classic Death Metal riffing with the modern aggression just works out perfectly well, and sometimes there’s even some additional lower death grunts that complete the picture. Best example – and my personal highlight on this new album – is ‘Soul Crusher’, a very catchy, yet totally energetic and brutal straight forward track which should work out best in a live situation. A couple more tunes like this and CENTINEX would catapult themselves into the first league of Swedish Death Metal pretty easily.