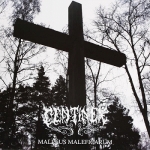 This album has been re-released probably a dozen of times and for a good reason. This could be marked as the sophomore album from one of the most iconic Death Metal (old school) acts coming out of Sweden. Going back to 1990, Martin Schulman (also from DEMONICAL and INTERMENT fame) pulled this band together aiming for the Sunlight Studio cliché sound, however what this band ended up sounding was a mix of the 90s Finnish bands sound with a the common (those days it was) HM 2 distortion. After the highly acclaimed “Subconscious Lobotomy” the band had a big pressure putting out a record that could top their debut album, and that’s how “Malleus Maleficarum” was born. Since the album kicks off, I hear a bit more melody in a creepy DISSECTION / SACRAMENTUM sense, which is not bad at all, just a bit different from what the band displayed during their first record. You can hear more solos through the album and the mix is a bit crispier and treble (once again, pointing a bit to what DAWN, SACRAMENTUM and DISSECTION were sounding like). If you couldn’t get a hold of this album while it was released by Wild Rags and Candlelight Records, you can grab a copy of the 2013 version released by AreaDeath Productions. If you are getting bored of your DEMONICAL, INTERMENT, MOONDARK and DIABOLICAL albums and need an old school injection thru your skull, get this album, while it’s not the top of the game it’s a very enjoyable ride. www.facebook.com/centinexofficial, www.areadeathproductions.com