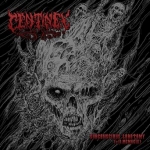 This might be the most overlooked band from the “Golden Age” of Swedish Death Metal. CENTINEX already started in 1990, but did by far not get the attention other bands from that era gained. Maybe it’s because they never had a deal with a bigger label. Their debut album “Subconscious Lobotomy” for example was released in 1992 through Underground Records (a name like a program…), as far as I know only 1000 CDs were made. In addition, the original cover “art” was such horrible, it looks like it was drawn by a child from a kindergarten. Well, a kid with a quite sick mind, to be honest. For the following releases (seven more albums and about half a dozen EPs and split releases), not that much changed. Well, the artwork became better, of course, and musically, CENTINEX never really disappointed the listener. But they always seemed to be stuck in the underground and so they gave up temporary in 2006, just to reunite this very year and announce a new album. To return to “Subconscious Lobotomy”, this album got re-released two times in limited quantities, always with new artworks, and now Pulverised Records did an ultimate re-release. This time, the artwork was done by no one else than Mark Riddick, and the original recordings were carefully remastered as well (the guitars were also partly re-recorded – Frank), hence the additional “(v.II.MCMXCIX)” in the title. Was it worth the effort? Partly, I’d say. If you can’t get enough of old school Swedish Death Metal, you will probably dig this one as well. A worthy Sunlight production, with all the trademarks of Swedish Metal of Death. But if you expect something more, you won’t be too disappointed either, since CENTINEX were pretty early to dare some experiments. Some decent keyboards, barely hearable, and two pretty similar shouters sharing vocal duties were new back then, yet these innovations didn’t really have an effect. And in ‘Orgy In Flesh’, CENTINEX were the first to have a female guest singer as well. But sad enough, these vocal parts got smashed by the Metal of Death and remained nothing less than a mere decoration. So this album has its best moments when it comes along more traditional, like in the brisk opener ‘Blood On My Skin’ or in ‘Dreams Of Death’ with some rather cool, yet typical guitar harmonies. And in the end CENTINEX surprise with the untypical ‘Until Death Tear Us Apart’, a kind of outro, that anticipated a lot of the ideas CEMETARY used later. Slightly pre-Gothic guitar leads, whispered vocals by Mr. Fred Estby and a rather doomy groove – all of this nearly unnoticed… So, there’s a historical reason for this re-release anyway. To spice up this re-release, we have three bonus tracks from the 7” EP "Apocalyptic Armageddon", originally released in 2000. To me, this doesn’t make too much sense, since these recordings were already the bonus of some later versions of the “Hellbrigade” album from the same year. So, they are neither exclusive, nor fitting in a historical context. Yet “Apocalyptic Armageddon” features three solid Death Metal tunes and proves that CENTINEX kept their path and improved their musical skills. On the other hand, these are rather unspectacular, too, so maybe that’s another reason why CENTINEX never really became a household name in Death Metal… If you need further information or just want to check out “Subconscious Lobotomy”, visit www.facebook.com/centinexofficial or www.pulverised.net