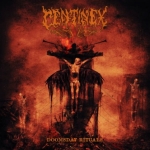 Swedish legends CENTINEX were formed way back in 1990. They released 8 albums before calling it quits in 2005. They then resurfaced again in 2014 with the album “Redeeming Filth”. Not wanting to wait more, in 2016 they release a new album. Hmm… I must admit, I really like the mid period era of this band, specially “Hellbrigade” is a great album. Their first albums were good, but a bit limited due to the use of a drum machine and still having to find a sound of their own. Obviously that changed with time. But then, they were gone. Instead many of the members went on to form DEMONICAL a band that is still going on today (sharing at least 2 members here) and that I consider superior. Well, I also had the chance to get a hold of their “comeback” album and this new one left me with the same sensation. CENTINEX is a Death Metal band with that crunchy fat guitar tone and that actually works better at a speedy tempo. But they decided to keep it more mid-tempo, and while it works for a few songs, it tends to get a bit boring at times. You have to be quite a beast creating mid-tempo songs and still get the listener’s attention through the whole album, something only bands like BOLT THROWER are able to do. In fact those British gods decided not to release an album they had finished as they felt it was not up to what they wanted. The few that were able to listen to some songs, told that it was too much of a mid-tempo thing and they needed to spice it with more speed changes and better riffs. Well, I think something similar happened with CENTINEX since their comeback but they decided to release it anyway. They are a band that can go with one or two mid-tempo songs, but they do shine and are very good doing fast songs as proven with ‘Sentenced To Suffer’. And there are not that many fast songs or fast parts for that matter. It is not a bad album per-se, but after knowing what they can do, it is just below their own capabilities. Next time turn the speed factor up. We will wait! More info at: www.facebook.com/centinexofficial, www.agoniarecords.com