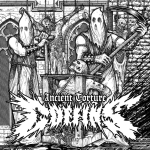 It’s more than ten years now that COFFINS spread their visions of Death and Doom around the world. A vision that combines AUTOPSY, especially their slow, creeping songs, very early CATHEDRAL and some influences from early Grindcore, before Porngrind and similar stuff entered the scene of crime. During these years, they have been very active and released tons of stuff. Aside from four albums in the last eight years, they released no less than sixteen (if I counted right) split releases in that same time, plus five EPs and a compilation. This compilation was a double disc, entitled “Ancient Torture”, and it featured 21 rare COFFINS tracks from their releases until 2009, among them all recordings from their first eight splits. Now this compilation has been put out again by Hammerheart, so it’s a nice chance for all you collector nerds to fill the gaps in your COFFINS collection. And all the others can check them out and hear tons of stuff. But be forewarned! It’s very uneasy to listen to both discs continuously, since the music of this Japanese four piece is not for easy listening, not even in terms of extreme Metal. This is owed to the very rough and somehow crusty sound that is a trademark of the songs here. But this trademark is what makes COFFINS a special and unique band. Add the fact that they know how to write cool shit like the nasty first song on “Ancient Torture”, ‘Eat Your Shit’ or the scabious creeper ‘The Cracks Of Doom’, one of my faves here. And ‘Abysmal Blood Sea’ features some severe influences from early Goregrind, except for the speed, of course, thus it sounds like Grindcore on 16 rpm. On the first disc we also find some cover tunes that show the influences of COFFINS, like ‘The Day Man Lost’ (CARNAGE), ‘Ebony Tears’ (CATHEDRAL) or the not that successful remake of ASPHYXs ‘Wasteland Of Terror’. A thing that’s really striking the ear is the very homogenous sound of the whole first disc, that seems more like a “real” album than a compilation of songs from different releases. This is not the case for the second disc, that doesn’t quite keep the high quality of the first as well. But it starts with another real fuckin’ killer, a song called ‘Mortification To Ruin’. This one even shows some influences by the mighty WINTER, might due to the a little less brutalized production. ‘Evil Infection’ is another smashing hammer, great stuff for AUTOPSY lunatics, yet the WINTER influences are present here as well. Two of my fave bands influencing a song – that’s a killer I fell in love with immediately… Some covers on disc two again, this time it’s PUNGENT STENCH (‘Bonesawer’), GOATLORD (‘Acid Orgy’) and a pretty cool version of VENOMs all-time classic ‘Warhead’ in two versions, a studio and a very raw live recording, both from the same 7” EP. Well, “Ancient Torture” will take some time for sure, but this double disc is worth it! If you need further infos and heart attacks, visit www.facebook.com/intothecoffin, or the label www.hammerheart.com