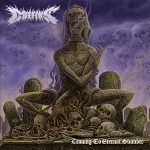 After “The Fleshland” and a zillion split releases COFFINS are back with a new EP to torture our auditory canals with oozing riffs, crushing drums and macabre grunts which immediately transport pictures of horror, death and pain into our depraved minds. “Craving To Eternal Slumber” is what their new abortion is called and it’s definitely their best release since quite a time. The EP starts off with a track that almost can’t get any heavier; bones are cracking, cadavers are flying and coffins are opened to seal your worthless fate. ‘Hatred Storm’ delivers on all fronts and is a perfect opener to warm you up for a ghoul’s night out at the graveyard. The second track ‘Tyrant’ starts a bit slower but evolves into something really punkish reminding of ABSCESS and the likes. The middle part can be seen as a nice tribute to AUTOPSY’s ‘Ridden With Disease’. The title-track later on is the first real Death / Doom offering on this release from front to back but also the first song that appears to be a bit weaker after a really good start. ‘Stairway To Torment’ raises the bar again with a slightly more individual songwriting approach which adds a bit of diversity to “Craving To Eternal Slumber” and another nice AUTOPSY tribute middle-part. With the fore last track COFFINS again add some Punk vibes to this release. The last song ‘Decapitated Crawl’ unfortunately finishes the record off a bit weak due to its slightly dull riffs and unspectacular songwriting. Fans of the band and Death / Doom fans should not miss this release and definitely check it out. If you didn’t like this style of music before you probably won’t like it after listening to this EP either and probably should die a slow and painful death anyways. Get your info here: www.coffins.jp, www.facebook.com/intothecoffin, www.hammerheart.com