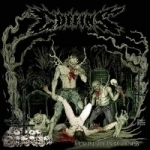 When mister Kreienbrink told me to check these guys out, I never really expected to like them in the first place, because there was something in his discription, that turned me off right from the start already… and that was the ugly little word “Doom”. I have never been a fan of that style of music (with only a handful of exceptions) and probably never will be. So, I was quite sceptical of course. But this Japanese three-piece luckily is far more than just Doom Metal, even though bands like SWANS, SCORN, CATHEDRAL or KYUSS get a mention on their website… but also WINTER and DIVINE EVE and HELLHAMMER / CELTIC FROST. Well, to me this is actually a very deathly version of classic HELLHAMMER / CELTIC FROST, just played with half the “speed”, but twice the heaviness! All of the seven featured songs on this album come up with an incredible individual playing time (often around the 8 minutes mark), but they still don’t sound boring at all! COFFINS have adopted a very raw, brutal sound, that fits them just perfectly and their simple, yet very effective writing formular is a very old school one (which I appreciate a lot!). As a whole “Mortuary In Darkness” (including its Chris Moyen coverart and the type of bandlogo COFFINS are using) totally recalls the late 80s / early 90s Death Metal scene, when tapetrading was still hot and bands like ABHORRENCE (FIN), DEMIGOD, FUNEBRE, APPARITION, GOREAPHOBIA and so on dominated the xeroxed fanzines! Very cool, to say the least. To get into the right mood for COFFINS, surf to www.coffins.jp and check out the mp3 of ‘Slaughter Of Gods’. Label contact: www.razorbackrecords.com