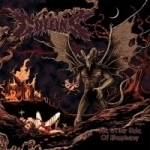 COFFINS
The Other Side Of Blasphemy
(Imperium Productions)
41:35min

I could easily have included my review for “Mortuary In Darkness” here as well, because these three Japanese warriors luckily haven’t changed a single bit ever since the release of their debut full length. Just like its predecessor also “The Other Side Of Blasphemy” got recorded at Noise Room Recording Studio and once more features seven extremely lengthy songs… The band still celebrates their very heavy version of classic HELLHAMMER / early FROST, mixed with the apocalyptic, doomy elements of WINTER and the blasphemous attitude and brutality of early 90s Death Metal (Finland and New York acts of that time in particular). Yeah, they even managed to come up with another very cool Chris Moyen coverart, which perfectly captures the atmosphere that the whole album evokes once again. Even though I personally still prefer songs like the album’s opener ‘Blood And Bone’, which they play a little bit faster (well, midpaced would be more accurate here), it’s still a real pleasure to listen to the album in its entirety because of its very honest feel and overall amazing heaviness. COFFINS by no means can be asscociated with the current wave of new brutal bands though! To me they actually come across more like an undiscovered gem from a far healthier and more creative period in Death Metal, when this genre was still pretty fresh, extremely raw and overall exciting as opposed to the perfectly produced and technically on the highest level (yet totally faceless) type stuff that we receive day by day. These guys still know how to deliver the goods, so if you’re into old school Death Metal the doomy way, don’t hesitate any longer and add COFFINS to your shopping list right away! For additional info check out www.coffins.jp. Their new label can be contacted at this URL: www.imperium-productions.com