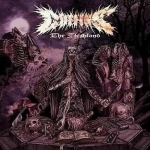 Along with the new AUTOPSY record, "The Fleshland" gets ‘album cover art of the year’ so far. Fucking gruesome and elaborate for all of us with morbid delectation! Anyway, COFFIN’s Relapse debut is just what you would expect from these Japanese murderers: savage and raw pounding Death Metal with a dominant HELLHAMMER influence (peppered with bits of DIVINE EVE and WINTER). In terms of progression, COFFINS have the AC/DC or MOTÖRHEAD syndrome – they’ve found their formula and are sticking to it. This album is best taken as a whole experience, and COFFINS provides a bleak and hateful ride. Neanderthal grooves erupt into elephantine D-Beats, accompanied by Ryo’s gruntal approximation of Craig Pillard. "The Fleshland" is more grim that 98.2% of the current new Black Metal out there – and if a post-apocalyptic future is peopled by family members who murder each other with broken furniture to survive, then this is the soundtrack. As a side note, if you’re a COFFINS fiend, be sure to hunt down their "Ancient Torture" LP, which collects their numerous 7" and split songs, as well as acutely punishing covers of bands such as CARNAGE, GOATLORD, and VENOM. More information about COFFIN at www.coffins.jp, http://coffins.bandcamp.com