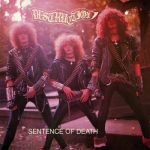 Clocking in at just under 20 minutes, DESTRUCTION’S 1984 EP "Sentence Of Death" captures what some would call the glory days of Thrash. For a band that’s consistently released music for over thirty years, this EP is pivotal in displaying their sound which has stood the test of time. Schmier (bass, vocals), Mike Sifringer (guitars) and Tommy Sandmann (drums) led the way in Germany’s Thrash attack in the 80s, with pure Metal at its finest. Aside from the somewhat silly EP cover, "Sentence Of Death" is a no-holds barred, full-throttle masterpiece. The evil spoken word introducing the EP, along with the mess of guitars going everywhere, usher in a pure Thrash sound with second track ‘Total Desaster’, a high velocity bombardment of guitars and furious drumming. ‘Black Mass’ envelopes us in fret-filled picking before collapsing into an almost off-beat track that changes at the drop of a hat throughout. And to accompany the world of Metal in general during that decade, there just had to be a song about mutilation (‘Mad Butcher’). And the lyrics…"You lie on your bed, your view seems great. But instead of his prick, he’s drawing his blade." Never a dull moment with DESTRUCTION. ‘Satan’s Vengeance’ is the atypical blasphemous track we all came to expect in the 80s. And we love it. The final track ‘Devil’s Soldiers’ continues the theme. Starting off melodic, it quickly erupts into a bass-thumping, sweltering guitar, heavy drumming track wrapping the EP up nicely. Any old school fan of DESTRUCTION most likely remembers "Sentence Of Death" fondly. There are no throw-away tracks on this EP. Just utter ‘destruction’ in the wake of three more decades (at least) to follow (interesting side notes: this High Roller Records re-release is the very first stand alone CD edition of "Sentence Of Death" ever that also features all lyrics, a shitload of classic pictures and a poster of the album cover – Frank). For more information, check out www.destruction.de, www.facebook.com/destruction, www.hrrecords.de