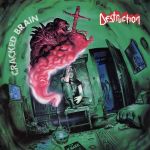 DESTRUCTION wihtout Schmier is not DESTRUCTION…? Well, according to the band only this release is part of their official discography… even if Schmier is nowhere to be found. I remember back in the day and after the band were touring for “Release From Agony” that things were not moving that good for them in the USA, both sales wise and on tour, so something happened that ended with the iconic vocalist splitting with the band for a good time. It seems they had already a good bunch of songs done in the meantime so one year after Schmier’s departure they released a new album, using their old friend form the Swiss band POLTERGEIST, André Grieder, to sing for them in this album. And that is the first thing that strike while listening to this, one misses the vocals that were such an integral part of the band. André is not doing anything to sound like Marcel and for once that is a good thing. Also, he does a more gruffier version of himself as in his band where he uses a much more melodic approach, whereas here he sounds more like shouting. And musically speaking this might be the most technical album the band has ever released, pretty much sounding like a normal evolution of what was heard on “Release From Agony”. Yet one cannot deny that the signature riffs of Mike are here. Strangely enough, even if this is also filled with those riffs, and contains many breaks and more technical composition, it does not completely work for the best. You see, the early Thrash Metal bands were good because of their simple approach. Becoming more technical never really worked for any of them. And although there are some very enjoyable songs here, and we can say that it is a very good album, it kinda does not fit along what DESTRUCTION meant for many of us. And let’s not forget this derived them into doing a few more recordings that they now do not consider as part of their discography. The THE KNACK cover contained in here was also a surprise. I mean they already had done a very good THE PLASMATICS cover, and also they were joking around with the Pink Panther them on the “Live…Without Sense” album, so let’s take it as they were having fun. As a DESTRUCTION album it is a weird one, where the essence is there but something is missing. As a Speed / Thrash Metal album this is a quite good and underrated release from the 90s and the High Roller Records treatment is a good chance to get it. www.destruction.de, www.facebook.com/destruction, www.hrrecords.de