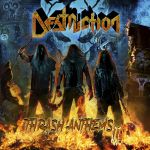 DESTRUCTION have been around a long, long time… from 1982 to be exact, and they’ve released many, many albums…15 to be exact. And they still rule the genre. Germany’s always spat out excellence in their Metal in all genres. But DESTRUCTION are at the top of the list in no-nonsense Thrash the way we like it. "Thrash Anthems II", a companion to 2007’s first "Thrash Anthems" revisits older songs and reworks them for the current decade. Schmier (bass, vocals), Mike (guitars) and Vaaver (drums since 2010) understand the right recipe to keep their music strong for 35 years. Newer fans weren’t even a glimmer of sperm in their father’s sack when Schmier and Mike began their Thrash Metal onslaught. The acoustic guitars of the opening track ‘Confused Mind’ may actually leave a few in confusion as the bass wanders up and down the frets in the background before the monstrosity of guitars and drums overtake the track, leading the way for the old school, high-pitched vocals to kick the door in. No punches are pulled and no bodies are left standing before ‘Black Mass’ jumps into the fray, whipping and gnashing with a fury only DESTRUCTION can provide. ‘Frontbeast’ is a chugging, staggering behemoth of a song that wets our appetites for more of the same. And the KING DIAMOND – esque squeal over one minute in reminds us of their old school charm. The fourth track ‘Dissatisfied Existence’ is a blood-spurting array of churning, belching putridity at its finest. ‘United By Hatred’ includes a staggering velocity of guitar-playing that would leave most musicians’ fingers a bloody mess. The change-ups throughout are dizzying. ‘The Ritual’ stands proudly with its monolithic power. And if you don’t get off your lazy ass and move on ‘Black Death’, then maybe you should rethink your life. ‘Antichrist’, ‘Confound Games’, ‘Rippin’ You Off Blind’ and ‘Satan’s Vengeance’ all deliver a snarling Thrash fest before the album ends with the DEAD KENNEDYS’ ‘Holiday In Cambodia’. The prominent bassline at the beginning, along with its punkish guitars and vocals throw a wrench in the history of DESTRUCTION in a way that rises them even higher in the glory of their catalog of Metal hymns. "Thrash Anthems II" is a monument to a band that’s proven decade after decade that they’re untouchable in their genre. For more information, check out www.destruction.de, www.facebook.com/destruction, www.nuclearblast.de