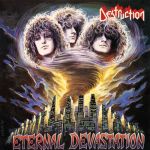 This year sees the reissue of all the classic (more or less) stuff the German Thrash legend DESTRUCTION released in their first creative and destructive period until 1990. Of course this means that the second full length “Eternal Devastation” is among those re-releases as well. On this album we have the last songs the original line-up of Schmier, Mike and Tommy recorded. After the extremely great first EP “Sentence Of Death” in 1984 and the either fine first full length “Infernal Overkill” half a year later, DESTRUCTION were already a band with a certain name in the scene when this album was released in 1986. I remember that the release of this album was gladly awaited back in the days, and how disappointed I was when I first heard it. Somehow the album sounded awkward to me, due to the production that was somehow thin, even in comparison to other releases of that era. But that wariness soon was washed away by the fact that the album was a good DESTRUCTION record again. Well, maybe not as great as its predecessors, but still fine. The three piece was still far from being skilled musicians, yet they more and more composed ambitious songs that still based on the band’s typical style of repetitive riffing and rhythms, but that contrast worked on “Eternal Devastation”. The opening ‘Curse The Gods’ is a good example for that unique way of composing, as well as the either rather long ‘Life Without Sense’. Some of the slightly improved musical skills showed up in the intro pieces of ‘United By Hatred’, ‘Eternal Ban’ and ‘Confused Mind’, where Mike presented some guitar masterstrokes. These songs themselves turned into typical to good DESTRUCTION tunes soon, with the catchy ‘Eternal Ban’ as the hit of the album. With the a little bit uninspired ‘Confound Games’ and the pretty boring instrumental ‘Upcoming Devastation’ there were two first flaws in the history of DESTRUCTION. Yet, “Eternal Devastation” was a still fine Thrash album that was a worthwhile ending of the original line-up. After the album, Harry joined the band as second guitar player and Olly replaced Tommy on drums. The release of the new line-up was the fine EP “Mad Butcher”, before the decline of DESTRUCTION began with the quite disappointing album “Release From Agony”. The demise culminated in the departure of Schmier and some releases in the 1990s the band officially disowns today. But that’s not the topic here. The reissue of “Eternal Devastation” is out on vinyl as well as on CD, the latter edition comes in a slipcase and has a booklet and a poster. Visit the band at www.destruction.de or www.facebook.com/destruction, and don’t forget to go to the label site as well: www.hrrecords.de