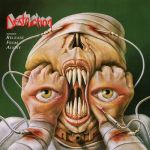 Germany’s High Roller Records are on an old school Thrash kick lately with reissuing several of DESTRUCTION’s early works and in a big way. Not only are we getting the albums remastered (thanks HRR!), a nice booklet insert, but also the albums come with a poster! As we all know the band’s early works did not have the best production value and that was in my opinion a limiting factor (don’t get me wrong, the music is great) at times, however, they did revolutionize and helped define the 80s Metal era. “Release From Agony” is the band’s third full release and the first to showcase 2 guitarists (Harry Wilkens having recently joined the band at this point and this would also mark the last studio album Schmier would do with the band until his return for 2000’s “All Hell Breaks Loose” ) which really kicked things up a several of notches. I think that addition helped them really focus on solos and the dual guitar attack sound. Now for those of you that have heard this album this might be more of a “been there / done that” review, however, there is always a new generation of fans that are being exposed to this album for the first time and therefore this is for you all. Musically this album is a solid one with choice tracks in the form of the intro ‘Beyond Eternity’, ‘Sign Of Fear’, ‘Release From Agony’, ‘Our Oppression’, and the mighty ‘Survive To Die’. The dual guitars, off the wall solos, and the drumming are nicely arranged for these songs and well, really the entire album. Lyrically the band did not stray off from where the blueprint of their previous 2 albums. It does make one wonder what would the first 2 DESTRUCTION albums have sounded like if Harry Wilkens had joined from the beginning? Oh well some things are better left to the imagination. Overall this is a great reissue that brought back some memories for me. Not only was this album the last album before what I consider DESTRUCTION’s decline in the 90s, but it was also a good template for how 80s German Thrash Metal should be done. The remastering, as I mentioned before, is a welcome addition, but the poster really puts the cherry on the proverbial cake. Check this one out as well as the other DESTRUCTION reissues on High Roller Records. For more information: www.destruction.de, www.facebook.com/destruction, www.hrrecords.de