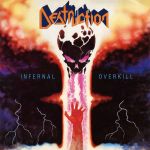 Reviewing records for this site often means a journey back in time for me. I’m just not sure if it’s due to being an old geezer that it’s mainly me to tell you about those recent re-releases of classic Speed, Thrash or whatever Metal records. Anyway, since I grew up being a Metalhead in the 1980s, I’m not the wrong person to do it. Right now, I’m presenting the early works of one of the most influential bands ever to emerge from Germany. DESTRUCTION, together with KREATOR and SODOM, was one of the acts that placed Germany on the map of Thrash Metal with a blast. Influenced by VENOM in general, these bands released monstrous debuts of black Thrash with evil and violent lyrics. Ah, those were the days… I remember painting pentagrams and inverted crosses, garnished with a triple 6, on books and desks at school. There was no better way to protest against church and establishment back then, at least not for me. Listen to the lyrics of ‘Prisoners Of Our Time’ from RUNNING WILD to find out more. Well, this feeling of rebellion against the traditional values was a phenomenon of the time, long before ambient Black Metal conquered the arts section of papers and magazines. Back then, adolescents like me needed a musical expression of that rebellion. Thus the bands like those I mentioned before came up and put their aversion, their resistance, their rebellion into music. In the catholic corner of the utmost South West of Germany, DESTRUCTION took the Metal world by storm in 1984 with their first EP “Sentence Of Death”. These three angry young men were not really good musicians, but full of enormous rage that culminated a rabid kind of Thrash Metal. The Metal world was hungry for a full album of DESTRUCTION and they fed the need only half a year later with “Infernal Overkill”. This album lacked a little bit of the brutal force of the EP, being slightly more tamed in the production. Yet, the eight songs still were a monster of Thrash Metal, with the band typical repetitive riffing and rhythms that fully came into bloom on this album. These trademarks made DESTRUCTION stand out of the just rolling wave of Thrash Metal, along with their still merciless heaviness. “Infernal Overkill” featured two re-recorded songs from the legendary demo “Bestial Invasion Of Hell”, the band classics ‘Tormentor’ and ‘Antichrist’. Both are among the highlights of the album, along with the furious opener ‘Invincible Force’ and the final over long ‘Black Death’ that is the best example for the unique repetitive riffing of DESTRUCTION and the fascination it had and still has on me. Of course the other four tracks are worth mentioning as well, be it the very solid Thrashers ‘Death Trap’ and ‘The Ritual’ or the rabid ‘Bestial Invasion’. It’s only the a little trite instrumental ‘Thrash Attack’ that can’t completely keep up with the rest of the album. Listening to “Infernal Overkill” more than 30 years later, the album not only knows to thrill me for the memories it contains. It still is a fantastic Thrash album with all the power and urge that was typical for the times it originally came out. And the finest thing is that now anybody can get his own personal copy of the album, since High Roller Records just put it out again on vinyl and CD, just like all the stuff DESTRUCTION released until 1990. Somehow I’m very surprised to find out that there are no extra tracks on this release. Instead, the CD version of this reissue comes in a slipcase and features a booklet and poster (and if you’re going to buy all of these High Roller DESTRUCTION CD re-releases and add them in chronological order to your CD shelf, the combined artwork pieces on the slipcase side will end up as the exploding "Infernal Overkill" skull artwork – Frank). For more information visit: www.destruction.de, www.facebook.com/destruction, label contact: www.hrrecords.de