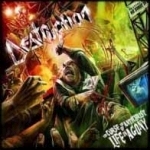 DESTRUCTION
The Curse Of The Antichrist - Live In Agony
(AFM Records)
97:58min