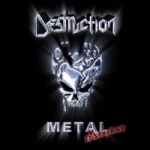 Were it the best DESTRUCTION album in the last 15 years or so, were it a Thrash classic of “Sentence of Death” or “Infernal Overkill” calibre, still I would laugh my ass off looking through the “Metal Discharge” CD booklet. Don’t get me wrong Herr Schirmer and Herr Sifringer, I’ve been admiring DESTRUCTION since your very first mini-album, I still consider your early releases to belong to the greatest pieces of Thrash ever released in this solar system and I even I respect you for keeping the old image, but enough is enough. Who do you think you are, top models or what? Posing on almost every one of 20 fuckin’ pages of the CD booklet looks downright stupid. I guess we had more than enough of your current photos inside “The Antichrist” already, thank you. Kill your designer and be yourselves, please. Now, having this burden taken off my shoulders and the annoying booklet sealed up, never to be opened again, let’s listen to what the music has on offer. Uh, uh, uh, not that much either, I’m afraid. I simply can’t recognize the good old band in these songs. What have they done to my DESTRUCTION, ma? Sure, the album has its bright moments, but for a band of such status it surely isn’t enough. This material sounds like being made in a rush and it was amusing to get to know that it was the case indeed according to Mike himself. Perhaps Nuclear Blast badly needed a new DESTRUCTION album no matter how good it was. But what about the fans? Did we really need such half-assed stuff? Except for the too screaming vocal delivery, their previous attempt, “The Antichrist”, was really a great album, at least as great as Thrash may be in 2000+. It has given us some hope to hear good old DESTRUCTION again some day. Now “Metal Discharge” is trying to kill this hope, to kill with no mercy. On the other hand, this time Schmier’s vocals sound surprisingly much more convincing than on the last two records, especially in songs like ‘Metal Discharge’ and ‘Fear Of The Moment’. Talking about the latter, it must be the only decent track here. It stands so high above the rest of the stuff on offer that it isn’t even funny anymore. The temptation to program my CD-player so that it would play ‘Fear Of The Moment’ 10 times instead of just once plus 9 other tracks seems to be too strong to resist. Holy shit, this one is utterly brilliant, a fantastic tune from the first to the last note! Total DESTRUCTION! Moreover, it isn’t a blueprint from some of their old triumphs, its charm has its own character. Gimme ten songs like that and I’ll put “Metal Discharge” next to early DESTRUCTION records not for any alphabetical / chronological reasons only… To save my day a little bit, the Russian edition of “Metal Discharge” released by Irond has (as a compensation for poor main contents perhaps) lots of bonus stuff like covers and demo versions of some songs in their primeval form. While pounding ‘Whiplash’ (METALLICA, of course) kills as it has always been and for ‘U.S.A.’ (both by THE EXPLOITED and in general) I couldn’t care less, IRON MAIDEN’s ‘Killers’ surely wasn’t screaming for such thrashy treatment which turned a good Heavy Metal song into a mishmash of noisy nonsense. Just like it was the case with the “All Hell Breaks Loose” album, ‘Bestial Invasion’ (here in the ’99 demo version) turned out to be one more proof that early DESTRUCTION stuff rules supreme over any current attempts of theirs. You can’t dethrone the king crowned by yourselves… To tell you the bitter truth, I have serious well-grounded doubts about the possibility of listening to this album from start to finish ever again. My problem only though, I believe nowadays DESTRUCTION has a huge army of new fans, huge enough not to care about some stubborn old farts sticking to their antiquated values. Hey, Frank, wouldn’t we have a couple of beers with “Infernal Overkill” on the stereo at a decent volume instead? (Hey Tim: You’re always welcome, even though I don’t think that this album is actually thaaaat bad… to me it’s mainly the annoying, screamy and constantly repeated choruses that really get on my nerves! Hey Schmier: how about some vocal stuff in the good ol’ ‘Bestial Invasion’, ‘Mad Butcher’, ‘Curse The Gods’, yeah even ‘The Butcher Strikes Back’ tradition instead…?)