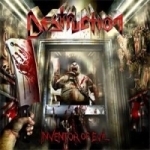 In my opinion a very big part of the euphoria concerning the return of “classic-era” DESTRUCTION was based on the countless live shows they did throughout the last couple of years. The band managed to impress with very energetic and often surprisingly tight performances, while thrashing through a setlist full of crowd favorites from the past. A very special experience for sure, especially for the younger Metal fans, who weren’t able to see Schmier and Mike live on stage back in the 80s. But that doesn’t necessarily mean that their new albums easily lived up to those high standards and I bet that those shows would never have turned out this successful if they had only played stuff off “All Hell Breaks Loose”, “The Antichrist” or “Metal Discharge”. On those records the band was more or less still struggeling to return back to their wellknown writing style, the original DESTRUCTION spirit was often sadly missed and therefore they delivered a whole bunch of mediocre tunes along the way. But they’ve obviously learned from past mistakes. The (originally way too modern sounding) production already got better and better with each album and it seems that on “Inventor Of Evil” also their writing skills have finally increased as well now. What really turned me off on various tracks on their previous records were the probably way too long or often repeated lyrics. The songs literally got buried by Schmier’s constant singing and the fact that parts of those vocal lines got doubled certainly didn’t make the whole process more enjoyable to me. Even though it’s still not completely gone on this new album, it was at least reduced very much, so that we’re finally able to enjoy Mike’s incredible riffings and the impressive drumming of Marc a lot more now. The album kicks off in a very ‘Hell Awaits’ type of fashion, with a similar riffing / drumming and after a spoken part on top of it (kinda close to “The end is near…” from “Sentence Of Death”) explodes into ‘Soul Collector’, which is already my personal favorite on the album. This is 100% DESTRUCTION, just musically more matured sounding and of course technically better produced. The straight ahead ‘The Defiance Will Remain’ and ‘No Man’s Land’ are two other good ones to me, ‘The Calm Before The Storm’ recalls ‘Reject Emotions’ a bit in its opening part and the much hyped ‘The Alliance Of Hellhoundz’ (with various guest vocalists) is without a doubt the weakest tune of offer this time. With all respect to the original idea of the song (unity in Metal), it by no means can compete with any of the other tunes on the record and already bored me rather quickly. But all in all I would personally still consider “Inventor Of Evil” as DESTRUCTION’s best offering since their reunion as it sounds fresh yet old school at the same time! That also goes for the cool coverart which features the classic mad butcher again. There’s also a limited edition digipak version available, which features a cover of MOTÖRHEAD’s ‘We Are The Roadcrew’, ‘The Alliance Of Hellhoundz’ (with Schmier’s vocals only) and a video clip, but as I don’t own that one I can’t comment on those extras here. For all further info check out www.destruction.de or www.afm-records.de.