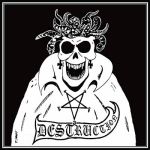 This is where it all started. Raw, badly played, poorly produced, copying their idols and again I won’t change a damn single thing. And then those vocals, that I would say had more of a Punk approach, but more likely due to not knowing what to do with the vocal style. And the riffs, no matter that it’s a poor production, the riffs are there and have stood the test of time in such a way that every respected Metaller will start banging their heads and doing the devil’s horn sign. Those who know will tell you that the band started with the name KNIGHT OF DEMON and in a more MAIDEN – esque style. But I am sure, that in one of those obscure German record shops, some of those adolescents that had barely found Metal as a way to let that anger out, surely found a VENOM record and that changed their lives forever… especially the two key members in here, riff master Mike and commander of hell invoker, Marcel Schirmer or Schmier for us old fans. And that new style they were looking for, it’s here, but even at that early stage, the genius of the band can already be heard. Actually, this new edition sounds even better than ever, due to the great remastering work of Patrick W. Engel. Also included is a rare, obscure rehearsal, so again do not expect hi-fi music, but the energy is there and we got two times ‘Death Trap’ and the original version of ‘Total Desaster’. Exclusively on this demo we can find the song ‘Front Beast’ where the band sounds like a total VENOM clone! This release comes in a fantastic presentation, with an additional slipcase, while the booklet includes the original cover and the one released in previous editions, plus a poster and old pictures. A certain Frank “The Front Beast” S. is responsible for the reworked cover art and the additional pictures. He also helped the band in the beginning, handled their fan club and later on their management, and in a way is responsible for the band jumping into the big leagues. Because of that man we have evil hyms like ‘Eternal Ban’ and ‘Dissastified Existence’. I hope he is rewarded by the dark gods with beer and sex! (well, at least I can name six different versions of the demo my own now: the original tape, a bootleg CD with TORMENTOR pre – KREATOR, the bonus disc of DESTRUCTION’s reunion album “All Hell Breaks Loose”, the Floga Records vinyl boxset, the Vic Records CD version and now this High Roller Records edition… – Frank) Ok, so back to this, any serious fan of the band needs to have this in their collection, since this is Metal history lesson 666. Back in 1988, if you asked me which was my fave band, there was only one answer: DESTRUCTION. And although they have their highs and lows after their third album, they still deliver total desaster live, where you must curse the gods and release from this agony! Are you still reading this and not ordering online? Go! Now! www.facebook.com/destruction, www.facebook.com/hrrecords 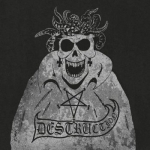 Like many other classic demos, also DESTRUCTION’s one and only "Bestial Invasion Of Hell" tape from 1984 has been bootleged countless times already until a first official re-release finally reared its ugly head as part of the 2 CD edition of the band’s 2000 re-union album "All Hell Breaks Loose". Ever since that reunion the band has been more active than ever before and their constant touring and the release of new material of course also regained the interest in DESTRUCTION’s old classics again. In that respect High Roller Records did a fantastic job with the re-release of their back catalogue earlier this year, followed by a great vinyl boxset of the aforementioned "Bestial Invasion Of Hell" demo via the small but fine Greek label Floga Records. Now Vic Records steps in and delivers the CD version of that boxset, which means you also get the same, newly mastered material (courtesy of Patrick W. Engel). But let’s be honest: due to the rather poor recording quality of the original material you hardly notice any differences. The CD booklet contains a bunch of vintage pictures and liner notes (both courtesy of the guy in charge of this review), the 2 versions of the demo cover (the 2nd edition, which also serves as the CD cover here, also done back then by yours truly at the age of 18) as well as short statements from the three original members Schmier, Mike and Tommy. The 6 featured songs don’t really need no introduction anymore since ‘Mad Butcher’, ‘Total Desaster’, ‘Antichrist’, ‘Front Beast’, ‘Satan’s Vengeance’ and ‘Tormentor’ became eternal DESTRUCTION classics and all have been re-recorded at some point later in the band’s career (‘Front Beast’ just most recently as part of the "Thrash Anthems II" album in 2017). The uncompromising, raw early versions still have a charme on their own after so many years though and Schmier’s inexperienced vocal delivery never sounded as raw anymore on any other DESTRUCTION release to follow. So, for any die hard fan of the band, a DESTRUCTION collection is only complete with the "Bestial Invasion Of Hell" demo, no matter which version you prefer. More band info at www.facebook.com/destruction, label contact: www.vicrecords.com