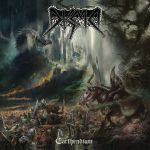 It’s been five long years since DISMA’s last release, the vinyl only 7″ EP “The Graveless Remains” and already eleven years since their one and only full length album “Towards The Megalith”… Apart from the 2021 PHLEGM cassette demo release “Consumed By The Dead”, the last (new) release on their label Necroharmonic Productions also already dates back to 2011 and funnily enough, it was a DISMA vinyl 7″ as well (“The Manifestation”). So, you can easily say that we don’t deal with a band or company here that really pays too much attention to any kind of business rules or expectations how things should be done. And that’s perfectly fine with me, because instead of flooding the market with new stuff all the time, both take their time and deliver what they do best. And that is brutal old school Death Metal with a true sense for what this music really requires! I don’t think I’ll still have to introduce this New Jersey based four-piece to any connoisseur of true fucking Death Metal anymore, since guitarist Bill Venner and vocalist Craig Pillard both have a past in INCANTATION, while drummer Chris Demydenko is also active in respected bands such as MAUSOLEUM, ABAZAGORATH and BLASPHEMATORY. So, with DISMA you’ll obviously get what you expect and that is very honest, ultra heavy Death Metal, mainly in mid tempo style, but with a couple of very fast outbursts and several excursions into sinister doomy realms as well. And this mixture just works perfectly well. Bill Venner’s guitar work is cutting deep into your flesh and evokes apocalyptic nightmares, while the vocal delivery from Craig Pillard has never been from this world anyway. That guy is so incredibly brutal sounding and has been the blueprint for a lot of newer bands that just follow what he already did with INCANTATION very early on. And the DISMA rhythm section builds the solid pounding backbone for those two guys: always straight and to the point, but never missing the focus. “Earthendium” unfortunately only features three, yet rather lengthy songs (‘Imprecation Of Diabolical Scourge’, ‘Beyond The Dimensionless’ and ‘Earthendium’), but all of them are a true feast for fans of heavy as fuck, brutal old school Death Metal. The raw production is just perfect and luckily not modern sounding at all. But you can hear every instrument clearly in the mix and what I always appreciate the most, the drums sound real and not triggered or even like a drum machine. DISMA delivers exactly what some of the newer INCANTATION releases seem to lack in for a while already and truly whet your appetite for full length number two, which is already in the works. According to Mr. Venner five songs are already written, so let’s hope we won’t have to wait on it this long again. This new EP gets rounded off by an awesome cover artwork, courtesy of Ola Larsson (TRAUMATIC, UNDERGANG, NECRONY, SULPHUR AEON), so “Earthendium” is unquestionable a must-have addition to your Death Metal shopping list. Along with Denmark’s UNDERGANG and the indestructible AUTOPSY, DISMA is definitely one of the very few Death Metal bands of today that never seem to disappoint! You can follow them at www.facebook.com/dismadeath and visit their label Necroharmonic Productions for ordering or wholesale details at www.facebook.com/necroharmonic