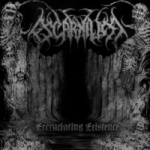 Dark, crushing and all-mangling Death Metal… like it? Well, at least I happen to know I do in many cases – and Brazil’s ESCARNIUM is simply a good example of how it can be done right. "Excruciating Existence", this 9-track debut full-length studio recording from these Brazilian Death mongers, is basically kind of ‘meat & potatoes’ type of a record, not really surprising anyone any more these days but still offering the basics for a murky, dark and heavy Death Metal the way that shouldn’t leave the band completely ignored. Vocalist and guitarist Victor Ellian sounds pretty much like Ross Dolan of IMMOLATION and Craig Pillard on INCANTATION’s debut album, "Onward To Golgotha" – added with occasional, guttural, inhuman growls similar to Bill Steer’s that he used to do in the UK’s finest gore gods CARCASS’ "Reek Of Putrefaction" album. Tempo-wise, ESCARNIUM prefer using fast tempos within the songs on their debut (for the most of the time at least) – and slower and more atmospheric parts are left more behind within their well enjoyable Death Metal assaults. There’s a few tasteful – more atmospheric and slower sections incorporated into this album, which I myself happen to like most because they tend to set a certain dark mood for the songs that really show what’s true, old school Death Metal all about. Combine REPULSION’s fast and grinding parts with some shameless, utter heaviness of bands like IMMOLATION and INCANTATION – and you have pretty much gotten a picture how these Brazilian Deathsters in ESCARNIUM sound like. "Excruciating Existence" being only the band’s debut full-length studio album, it’s really a solid piece of work altogether. You may want to sneak through their half-open door into the world of something macabre, disgusting and gory…? More at: www.myspacee.com/escarniumdm, www.hellthrasher.com