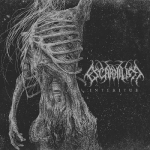 The Brazilian Deathsters ESCARNIUM come back with their second album, four years after the previous one, titled "Excruciating Existence", a good debut full-length that confirmed the same Death Metal style as on the first demo "Covered In Decadence" and on the EP "Rex Verminorum". Active since 2008, this band keeps on developing an obscure, nihilist and uncontaminated form of Death Metal, mainly influenced by INCANTATION and early IMMOLATION (like many of nowadays most hyped Death Metal acts), with also a good feeling for melodic taste of riffing work. VOMITORY could be another easy comparison for instance. Anyway, these guys from Salvador are more than a simple clone band, in fact with "Interitus", they got a level of songwriting above the average. The opener ‘While The Furnace Burns’ starts the massacre after a short intro, biting quickly like a predator yet ending slower with a killer guitar solo. This is only the first good example of the high quality of this album, that doesn’t swing but keeps on the same range. ‘Starvation Death Process’, lasting more than six minutes, has all the elements needed to unleash demons in your head and it’s probably the best song of the album, surely my favorite. It’s based on a slow / mid-paced rhythm, developing a progression of majestic riffs and insane melodies, while the drums are incredibly dynamic. ‘Radioactive Doom’ is a good choice for being the following track, fast since the start, it’s the classic song for destroying everything on stage, so I think it will not miss their live set. This tendency continues for the rest of the album, there aren’t false steps. Rather, on the second half of the album, ‘The Gray Kingdom’ and ‘100 Days Of Bloodbath’ stand out for both intensity and morbosity. The deep growl of Victor Elian is really great, he sometimes reminds me of John McEntee or even Anastasis Valtsanis. Arrangements and guitars solos are adequately conceived and performed, as the drums of Nestor Carrera is excellent. The production of "Interitus" is surely the most professional and well-finished of their career, remaining appropiate to the violent and bare sound that identified the previous works of this band. This album is surely quite a coup for both Testimony Records (for the European market) and Redefining Darkness Records (for the American one) that are releasing it, so check out www.facebook.com/testimonyrecords or www.redefiningdarkness.com. For more information and updates on the band visit: www.facebook.com/escarnium.