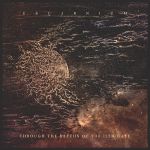 ESCARNIUM
Through The Depths Of The 12th Gate
(Redefining Darkness Records)
09:29min

The name ESCARNIUM is already widespread in the Death Metal underground, as the guys from Salvador in Brazil used to be pretty active in the scene. Releases on a constant basis and lots of touring shaped the first years of their existence. After more than five years of silence, as far as new songs are concerned, and some line-up problems, ESCARNIUM are now back with an EP with a new song and a cover tune. Recorded by the duo of main man Victor Elian and drummer Nestor Carrera, this new sign of life holds out hope of more new stuff. With ‘Through The Depths Of The 12th Gate’, the EP features a new song of fine Death Metal, variable in speed and a good dose of head banging groove at the right times. This one will surely be a joy for anybody who digs Death Metal of the old school. Talking about “old school” – the second track is a really well done cover of an old AMORPHIS song. ‘Pilgrimage From Darkness’, which is the original version of ‘The Pilgrimage’ from the “Karelian Isthmus” album, is from an era when AMORPHIS still were a joy for old fashioned Death Metal fans. And the version from ESCARNIUM does the original justice and transfers the song into the now. So I think I can recommend “Through The Depths Of The 12th Gate” here with good conscience. If the next ESCARNIUM album will be as good as this EP, it will surely be a highlight of the year. Visit www.facebook.com/escarnium and www.facebook.com/redefiningdarkness