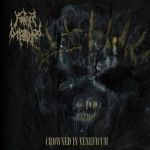 Brutality reigns supreme! If you have read these very pages the last many years, you might have noticed that I have a profound weakness of brutal and chaotic Death Metal, and especially the kind this brutal entity from Atlanta, Georgia delivers. The band is the brainchild of Justin Blake Stubbs, who also roams in ENCOFFINATION, another hellish, dark and brutal outfit from Atlanta and countless other bands. Whenever I have written some words on this band, I have always mentioned INCANTATION and IMMOLATION as their legacy is very much present in the music of FATHER BEFOULED. The dark, evil and rumbling rawness of the first mentioned band and the sheer intense pummeling of the latter, churned into an abyss deeper and darker, and more frightening than the worst nightmare of Edgar Allen Poe and H.P. Lovecraft combined. Normally I dive straight into the abyss and get turned upside down by a new release by FATHER BEFOULED, though this time it wasn’t so. I had to use quite some spins to get convinced that this was a worthy album, from the band. At first I couldn’t feel the soul of the music, it seemed too clean and at the same time too chaotic, which might be two opposites. Let’s take the production first, it is more clear and powerful, than we’ve heard from the band before, which creates a great separation of the instruments, and intense power on both guitar riffing and drumming, all details are crystal clear. Compared to earlier, where things had a tendency to mud together, in a great energetic puddle of brutality. That did might catch me a tad off guard. On top of that, the guitar riffing is much more evil and wicked than before, immense power chords, disharmonic wicked riffing, blistering leads all tied together quite strongly. Strong and present drumming by the man behind the kit Amos Rifkin, who rounds off the line-up quite good, with his atmospheric and powerhouse drumming. Both, Derrick Goulding, who handles one of the guitars in the band, and is behind the final mix of the album and Loic Fontaine, who mastered the recording, have done a hell of a job to keep the intensity, brutality and darkness on this release! Musically it is a tour de force of evil darkness cloaked in sheer raw brutality and chaos, with a fine thin red line through it all. When you take in the music, you are caught behind the veil of darkness. Even though the music is pummeling and over the top brutal, it is varied as fuck, there are the most wicked riffs that throws you off, catchy hooks, screaming leads and solos, neck breaking pace shifts, vocals from the graveyard and below, all tied nicely together in a full package! “Crowned In Veneficum” is a worthy contender to one of the best Death Metal albums this year! It is quite complete, brutal, evil and with an overall coherence that is hard to find these days. The production on top of the stellar music makes my day, the famous icing on the cake. Give this album some spins, let it sink in, succumb to it! Enter the profance heavenly crypt: www.facebook.com/fatherbefouled, www.facebook.com/everlastingspew