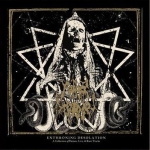 You know it, I’m a sucker for releases like this, making hard to get items easy to get hold of, unless I of course have them all myself, then I really can’t find the need for such compilations as this. Though I don’t have any of the releases on this compilation, even though I find FATHER BEFOULED to be on of the more interesting bands on the Death Metal scene today, so "Enthroning Desolation" is a real treat for me to indulge in. I know I wrote Death Metal just above this sentence, and that is not quite the truth. FATHER BEFOULED is Death Metal, though a lot more, as they have a dark dark, eerie and heavy doomy edge to their music, a dark and succumbing atmosphere that pummel you, and leave you out of breath, gasping for a break in the music, to get back on your feet. A tour de force of doomy Death Metal, where the main inspiration from the mighty INCANTATION shines through, if you are into the three first INCANTATION albums, you’ll worship FATHER BEFOULED as well, just beware of the added dark- and hellishness, the music is hitting hard! The album here is compiled of FATHER BEFOULED’s offerings to the splits with HELCARAXE, DEMONIC RAGE, MACABRA and DECREPITAPH as well as their "Rotting Godless Throne" 7". On top of that we are getting two live tracks from their performance at Sacrifice The Nazarene Child festival in 2010 and one track from their performace at Martyrdoom festival 2012. The live offerings are ‘Reeking Of Piss And Sadness’ from their demo "Sacrificing Oblivion", ‘Vomiting Impurity’ and ‘Testament Of Unholy Essence’ from "Morbid Destitution Of Covenant", quite nice to hear the lads live, I can only imagine how crushing it will be to catch them in front of a stage, damn. This is the perfect soundtrack to the coming winter, I’m glad this ended up my alley, now when things are starting to get cold and dark, here in Scandinavia, as the uncomforting darkness FATHER BEFOULED spews forth embraces the starless nights and dark forests and fjords quite well, a hammer of hate and disgust towards those of the light. Enter the blissful blodshower at: www.facebook.com/fatherbefouled, www.darkdescentrecords.com