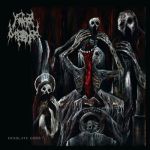 With a plethora of bands under Justin Stubbs’ (vocals) belt, such as the solo meanderings of HILLS OF SEFIROTH and a very, very brief stint in Henry Derek’s (ACT OF DEFIANCE) LILITU (of which there were no further albums with the new line-up), he’s fully come into his own with the doom-ridden Death Metal of FATHER BEFOULED. More upbeat than not, and with five full-lengths, this Atlanta based band blends miasmic proportions of murky guitars and belching vocals. "Desolate Gods" opens with the ominous intro ‘Exsurge Domine’ which introduces the second track ‘Offering Revulsion’, a crunching, shattering, powerhouse of a beast with blood-curdling vocals, swarming guitars and pounding drums. Slowing down to a little doom, the song picks the pace back up near the end. ‘Mortal Awakening’ is a thunderous attack of the senses. The drums are numerous punches to the face, with blistering guitars and drowning vocals. ‘Exalted Offal’ is another consistent delivery, ending the first half of an extremely sturdy album. ‘Ungodly Rest’ is just that, a foggy, slowed down creature from the fathoms of hell. ‘Divine Parallels’ get things going again with a mid-tempo number before leading into the snail-paced instrumental ‘Vestigial Remains Of…’, and ending with a furious roar of angst in ‘Desolate Gods’. There’s not a disappointing track on "Desolate Gods". FATHER BEFOULED have gifted us with yet another solid, Death Metal album that lingers in its own filth. It is of sheer putridity just the way we demand it. For more information, check out www.facebook.com/fatherbefouled, www.darkdescentrecords.com