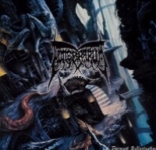 Hell-Yeah, I really love the FUNEBRAUM debut CD "Beneath The Columns Of Abandoned Gods ". It’s a mighty piece of unholy early 90s Death Metal. That’s exactly what I would call Death Metal the way it was meant to be. So I was really excited when I found the Midnight Records package including this unholy piece of vinyl in my mailbox. And wow, what an awesome Dan Seagrave cover artwork (not to forget the killer gatefold cover and colored vinyl! – Frank). This dark and unholy painting perfectly fits to FUNEBRARUM’s raw old school Death Metal style. This EP contains an intro and the songs ‘Dormant Hallucination’ and ‘Adoration Of Abscessed Cadavers’. Both songs are remarkable hymns of majestic old school Death Metal brutality. Mr. Franke already praised that aforementioned debut album here on the VOICES website so there’s no need for me to describe the FUNEBRARUM style in depth. Especially because both songs on this vinyl are also featured on that aforementioned debut CD. Although the songs were taken from different recordings sessions I definitely would prefer to get some new FUNEBRARUM stuff in my fingers. Nonetheless I highly recommend this EP. Get your fingers on this soon. Label contact: Midnight Records, P.O. Box 847, Bryte, CA 95605, U.S.A.