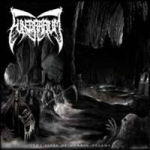 The black death has killed millions of people over the centuries and the New Jersey based FUNEBRARUM have released the perfect soundtrack to this middle age burden with “The Sleep Of Morbid Dreams”. I’m for sure not the only one who did not expect a further album from them due to the long delay in finding the right staff plus recording and releasing which should explain the endless silence of nearly 9 years (huh? And what about “Conjuration Of The Sepulchral”, their split CD with INTERMENT from 2007 Mr.Auch? – Frank) . The 2001 official debut “Beneath The Columns Of Abandoned Gods” via Necroharmonic Productions was only a re-release of their “Tombs Of Sleeping Darkness” demo from 2000. The FUNEBRARUM crew is a wild bunch of American underground musicians (which are part / founding members of this small scene since nearly two decades) and this album is traditional as fuck. The seven songs are old school Death Metal with minor Grind influences plus the perfect morbid atmosphere. Think that 75 % of their influences can be found in the old European Death Metal school right between the “IVth Crusade” and “The Day Man Lost” but especially when the band is “speeding” up a little (‘Cursed Eternity’) their local roots are shining through. FUNEBRARUM are calling their style Dark Brutal Death Metal and this exactly what you get – no experiments just morbid Death Metal with a great sound and atmosphere. “The Sleep Of Morbid Dreams” is offering no surprises – but hey who cares – the pure Death Metal releases have become a rare species and every traditionalist will understand my point after listening to the first song. Great stuff … – for more info please check. www.cyclone-empire.com, www.myspace.com/funebrarum, www.funebrarum.com