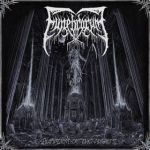 FUNEBRARUM returned back to form last year with a 4 song EP on vinyl via Doomentia Records and just recently (in June) it was issued out on CD. The band had a busy 2016 with also committing to a split with PESTILENTIAL WINDS while working on the EP. For those of you that have heard this band before then you already know what you are getting yourself into: pure old school era Death Metal which at times falls in the vein of old INCANTATION (hear track 3 ‘Abandon Gods’) and old MORTICIAN (sans the lengthy horror movie intros). Regardless the band is relentless with crushing guitars (a DEMILICH like riff during the track ‘Draped In Silence’), fast decimating drums, and guttural vocals. The production was good although my only complaint is that the vocals sounded a bit muffled / under produced and to me it took away from the music. The EP provides a glimpse of what we might expect from the band on a future full length album. My favorite track is the title track. It starts off in a slow churning Doom style jam and then quickly picks up steam half way through the song. It all came together nicely on this track and really showcases the EP. ‘Abandoned Gods’, as mentioned earlier, has that “Mortal Throne…” era sound especially with the guitars. I really enjoyed this song due to it not only being over 7 minutes but it had some really catchy riffs. Lastly we have ‘Into Dark Domains’ which just rips flesh and cracks bones, the song from start to finish is just great. No filler all thriller on this one. In summary you have a nice 4 song EP to help get you the FUNEBRARUM fix until the band can set some time aside to work on a new full length (hopefully that will happen sooner than later as it has been 5 years since they issued out a full album). The band continues to chug along not changing the formula that has made them an underground beast of a band. Worth checking out. For more information check out: www.facebook.com/funebrarumband, www.doomentia.com