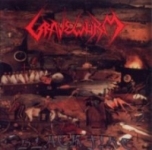 Sixth album of these long time purveyors of filth. And much to my surprise, there is a few signs of evolution in their music. Few. For once this American duo, has always kept their tradition of playing under produced, very basic Death / Doom Metal, which owes a lot to CELTIC FROST and VENOM as well as MOTÖRHEAD and some old touches of streetwise Hardrock. Their productions always tend to be just above rehearsal qualities and such, proved at least for me a hard time in listening to the band in their full potential. Well, this has not changed that much here, although the sound quality is quite better than previous recordings. Still the vocals fall in a semi Black Metal shriek style which is not exactly adding anything and without doubt sound uni-dimensional and boring after a while. Still, I enjoy it. I have some of their older releases around and no one was good enough to be put again on the CD player. Well, this one in fact did the miracle of me listening to it again. Some entertaining songs in here like ‘Venomous’ and with a lot better guitar sound (still a bit weak, but they seem to go in the right path now). Included are some interesting live recordings of the band in Europe. And the band has already planned ANOTHER album to be released this year. I just hope they are able to crank up the guitar power more and add a bit more variety to the vocals… oh, and the Hardrock touches they go from time to time, in fact are very good, and add more to the music without taking heaviness just like in ‘Eden Shall Burn’. If you liked the band before, you will welcome the bit evolution… and if you never cared for them you might as well get surprised. I am waiting the new album and hopefully it will finally blow heads as it seems they are able to. www.myspace.com/gravewurm, www.time-before-time.com