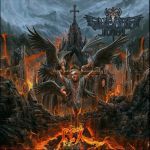 GUERRA TOTAL from Colombia have been around since 2002, first going under the name ETERNAL DRAK and later adopting their current name under which they’ve released 9 full-length albums and numerous splits. Despite all this productivity they only came under my radar now with their tenth album “CCX”. It consists of 14 tracks, 4 of them being accoustic interludes, all sung in Spanish, which suits the overall dark atmosphere very well. Here GUERRA TOTAL deliver rather straight forward blackened Thrash Metal with frantic drumming, quite simple, yet well-played compositions and rough, barbaric vocals that remind me of MORTEM in their delivery. The tempos go from slower interludes to really fast thrashing outbursts, so it’s a dynamic beast, albeit one that doesn’t hold my attention for too long. With that being said, the compositions are quite forgettable and don’t make me crave for more or to push the “play” button again, it’s a rather generic affair – not bad but defintely not great. Check it out for yourself here, maybe you’ll be more impressed: www.facebook.com/guerratotalband, www.facebook.com/ibdc666