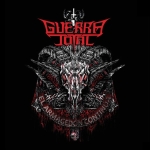 Up to now, I never heard of GUERRA TOTAL (Spanish for "Total War") from the Colombian capital Bogotá, even though the band seems to be one of the most active bands on this planet. After more than ten years of rehearsing and finding the right line-up and the right name, the year 2008 saw the three – (now four -) piece getting started with their first demo. After several "smaller" releases like EPs, split-releases and compilations, they released one full album per year since 2010. So "El Armagedón Continúa" marks the fourth album by GUERRA TOTAL. And, as I said, my first contact with them, too. Listening to "El Armagedón Continúa", I’m pretty sure that I haven’t missed something before. Musically, GUERRA TOTAL offers a mix of Speed and Thrash Metal with a distinct blackened spirit, reminding me somehow of METALUCIFER or DESASTER. But even though I like simple and unprogressive Thrash, this album passes me by in the long run. Most of the songs sound somehow uninspired and the riffs simply don’t really kill. In addition, the sound is just too weak to catch fire. Sometimes real Speed Metal guitar solos like in the opener ‘Nuklear Zombie Division’ made me sit up, but that didn’t keep my attention for long. Only the last two songs are really nice, since ‘El Color Que Cayó Del Cielo’ comes along with a cool organ break that helps to create a slightly scary atmosphere. And the final ‘Black Speed Rock And Roll’ keeps what the title promises, it’s a good mood headbanger that made me grin. But two nice songs really don’t make a good album. If you’re into the mentioned bands, you might catch some more information at: www.facebook.com/guerratotalband, www.reverbnation.com/guerratotal, or the label site: www.ihate.se