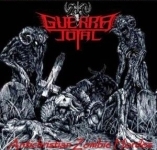 This is a misleading album, unless of course you are already familiar with Colombia’s GUERRA TOTAL. The cover art, with its undead zombie goats rising from the grave with an inverted cross in the midst, practically screams, “WAR METAL” in the style of bands such as BLASPHEMY, BLACK WITCHERY, PROCLAMATION, and so on. However that is, surprisingly, not the case. Instead, what we have is an album directly inspired by BATHORY and Speed Metal from bands like DESTRUCTION. One thing which stands out on this album is the vocal performance: vocals on this record are extremely abrasive and harsh, sounding like a hellish, gravelly rasp and they alternate between Spanish and English. The first song after the atrocious intro (which could not be shorter its so bad), ‘Invasi Demoniaca (Alien Invaders II)’ is totally derived from BATHORY’s song ‘Necromansy’. Track 7, ‘Burial Ground: Nights Of Terror’ as well as track 6, ‘Evil Zombie Horror’, show the band’s faster influences. The bass line of track 6 in particular displays the Punk influence that most Thrash and Speed Metal has. Indeed, BATHORY was inspired by bands like THE EXPLOITED and GBH so the Punk influence for GUERRA TOTAL filters down through BATHORY as well. GUERRA TOTAL has been around for a while now, having formed in 1997 under the name ETERNAL DARK. Two albums under the GUERRA TOTAL name were out before this one: “Nuklear Zombie Division" (2010) and “Mas Allia De La Tumba” (2011). While I’m not familiar with those two titles, they seem worth checking out based on “Antichristian Zombie Hordes”. More info at www.facebook.com/guerratotalband, www.forgottenwisdomprod.com