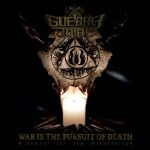 GUERRA TOTAL
War Is The Pursuit Of Death: A Hymnal For The Misanthrope
(Satanath Records / Iron, Blood And Death Corporation)
41:04min

GUERRA TOTAL are a well established name from Colombia, this being their ninth full-length, besides a number of split releases and such. Their productivity has shown some changes in their sound: they began as a really good if somewhat unoriginal Black / Speed Metal band but slowly evolved into heavier Black / Death Metal… not that they slowed down, really, but they must have downtuned their guitars a bit and gone for a gruffier vocal approach. Their name meaning “total war”, they surely persist in the musical barrage. I have seen them being compared to the godly MORTEM from Peru, and indeed there are some moments of proximity, mainly in some vocal lines, but whereas the Peruvian band is very much old school blackened Death Metal, I find GUERRA TOTAL sometimes show some other influences. The opening track ‘Ancient Hymns To The Goddess Of War (Inanna)’ is rife with nordic Black Metal guitar playing (although this is misleading as it rarely shows up again in the rest of the album), and besides they have this absolutely inhuman ultra-speed drumming. Often they find their footing in a very efficient manner, in songs like ‘Battle Of Ypres (Song For My Funeral)’ or the very impressive ‘Holodomor (La Muerte Roja)’. The songs are fast, but with some complexity and variation. I enjoy the occasional singing in Spanish, as the vocalizations strengthen that South American feel I so enjoy. When they do have a shout out to their earlier days, namely in the closing song ‘Whisky Bitch’, they show they really can rock too. I expected this to be just a “fun” exit to the album, and it is, but it is also a competent old school Speed Metal track perhaps inspired by BULLDOZER, at least in spirit. The bottom line, this is a very fast and brutal Death Metal album with a clear but heavy production and solid compositions and delivery. And it is definitely recommended, as they do a remarkable job, as you can confirm going to www.facebook.com/guerratotalband, www.satanath.com, www.facebook.com/ibdc666