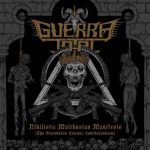 I have been following this band since their third album, and this is actually their seventh! Formed in Colombia back in 2002, this is the kind of band that has evolved from album to album, quite little, but noticeable enough. They are crafting a very interesting mixture of Speed / Thrash and Death / Black Metal, not far away form bands like POSSESSED, BATHORY, SLAYER or CELTIC FROST. They reminded me of Bolivia’s BESTIAL HOLOCAUST in style, where there is a lot of intensity in their songs, a very strong Speed / Thrash guitar sound, some very good solos, and of course raspy vocals from hell. Also, the band is doing an interesting take on the lyrical approach as some of them seem more in essence to a conceptual history rather than a collection of songs. I can sense an Egyptian influence in the lyrical and visual aspect to this album mixed with some Lovecraftian mythology. At times some of the riffs transport you to the sounds that were common in Brazil like early SEPULTURA, VULCANO or THE MIST. Yet it does possess that exotic feeling, and I must say that this is their best guitar work. If you can, get hold of their other albums, as they are in a very similar league and quality, but this one, is really a great Black / Speed Metal monster! www.facebook.com/guerratotalband, www.facebook.com/ibdc666