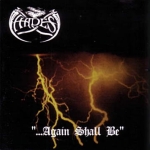 HADES are not the most familiar name when it comes to Scandinavian Black Metal in the early / mid 1990s. For whatever reason, I do not know. Of course the second wave of Black Metal bands never meant to be famous, but HADES was below the level of recognition. Maybe because they released their debut “…Again Shall Be” on the small American label Full Moon Productions and it was quite fast sold-out. Maybe the reason is the name changing into HADES ALMIGHTY due to another band with the name HADES. By the way, according to metal-archives.com there are at least eight bands with the name HADES, so I do not know if the name change was really necessary. Or maybe it is due to the fact that guitarist and keyboard player J.I. Tunsberg did not boast (like many other attention seekers) his involvement in so-called satanic circles and church burnings. Recorded in Grieghallen Studio this output contains the core of Norwegian Black Metal. Taking the essence of CELTIC FROST and BATHORY and developing it one step further by adding the emotions of the vast and desolate yet awe-inspiring northern landscapes. More slow and mid-tempo based, no sheer fury like EMPEROR. The guitar riffs are majestic and expressive, I guess IMMORTAL and ENSLAVED must be pretty envious. Even SATYRICON did not manage to play and sound better on “The Shadowthrone” like HADES did on “…Again Shall Be”. Talking about Norwegian Black Metal without talking about HADES is a pretty fail. No more words needed on that topic. The one aspect I do not understand is the reason of this re-release, besides the essential music. “…Again Shall Be” was already re-released in 2010 via Displeased Records, the demo “Alone Walkyng” was additionally added to that re-release. But obviously even the re-release is sold out, so Hammerheart Records decided to publish the album again. www.facebook.com/pages/hades-true-dark-norwegian-black-metal/229402880428179, www.hammerheart.com 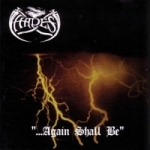 HADES
...Again Shall Be
(Displeased Records)
74:31min
If you are not to the biggest fan of old US Heavy / Thrash Metal the band name HADES should from now on automatically be connected to this wild horde from Bergen / Norway. Their first releases including their cult demo “Alone Walkyng” – officially released in 1993 with a lot of re-releases in various forms via Wounded Love Records – their debut and their second record “The Dawn Of The Dying Sun” are essential releases if it comes to the terminus Norwegian Black Metal. Their debut “…Again Shall Be” is, based on my opinion, still one of the few releases which deserves to be called blueprints of the dark and majestic side of the above mentioned style. The re-release via Displeased Records was more than overdue and the band has chosen a good label for this project. The CD comes with a hell of bonus material, meaning the complete demo as bonus and a long interview – which is in some way like a history lessons of these early days – a more than detailed booklet plus the remastered version of this masterpiece. After the quite successful release of their demo HADES entered in early 1994 again Grieghallen to record under the supervision of Pytten their official debut. With a little bit of luck for all involved “…Again Shall Be” has seen the light of the day via Deathlike Silence Prod. but history chooses its way without mercy. So after the well known events of 1994 the album was released via US based Full Moon Productions. The 10 tracks – including two re-recorded demo tracks (‘Unholy Congregation’ and ‘Hecate’) – shows a Norwegian act which combines the dark side of Black Metal with the majestic side of a Norwegian winter day. Especially the remarkable (acoustic) guitar parts supported by truly majestic keys give the mid-tempo tracks the necessary counterpoints – like a clear view to the cloudless nightsky – and songs like ‘Glorious Again The Northland Shall Become’ are perfect examples for the enormous quality of this release. Black Metal has developed over the last 20 years but releases like “…Again Shall Be” are still outstanding – especially if it comes to the highly praised Norwegian style. It’s a shame that HADES released this masterpieces via a smaller label because musically the band deserves a place in Valhalla – metaphorically spoken, because the band is still active – next to bands like EMPEROR or ENSLAVED. For further information please check www.hades-almighty.com, www.displeasedrecords.com
Matthias Auch