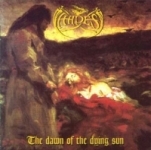 HADES
The Dawn Of The Dying Sun
(Displeased Records)
70:08min

If it comes to the glorious times of Norwegian Black Metal there is nearly the same amount of acts which received far more attention than they deserved than bands which got lost in the swirling maze of time. One of these honored but nevertheless quite unknown acts – compared for example to their brothers in arms IMMORTAL – are the almighty HADES. For the blink of the moment this underground act has become “famous” due to the participation of one of their members in the Norwegian burn down your local church games of 1993. It seems that over the years this fact had been far more important than the musical legacy of this act either as HADES or later on as HADES ALMIGHTY. But Displeased Records are making this raw diamond of true and majestic Norwegian Black Metal available again. The second full length release “The Dawn Of The Dying Sun” – originally released via US based label Full Moon Records – is showing once more the unique constellation of the natural Grieghallen sound connected to the purest form of Norwegian extreme Metal. The 2010 version comes with three bonus tracks – one BATHORY cover, one fantastic live track and a remaining song from the recording session for the so far last record “The Pulse Of Decay”. The bonus material of nearly 25 minutes playing time plus full lyrics and a supporting interview is more than just standard – see as negative examples the Metal Mind re-releases – and definitely highly appreciated. But the original eight tracks represent such an overwhelming amount of fantastic material already that they aren’t necessary to justify this re-release. Especially the re-recorded version of ‘Alone Walkyng’- originally a track from their 1993 demo – is essential if it comes to the terminus of Black Metal from Bergen / Norway. A further remarkable track is the final opus ‘Pagan Prayer’ which is transforming a normal fiddle / violin part into an unbelievable ear catcher. I’m a huge fan of this release ever since the original release in 1997 and the album enjoyed over the years far more airplay than a lot of other cult release of these days. So hail the mighty kingdom and check the following links: www.hades-almighty.com, www.displeasedrecords.com