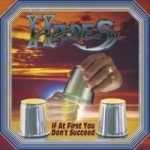 In the line of reissues Cyclone Empire Records released from HADES (US), their famous second album "If At First You Don’t Succeed" can’t be excluded. This one features at least 6 bonus tracks that rounds it up to a total of 19 tracks! The sound is awesome, thanks to a great remastering job. As you might already know or have just read in the previous reviews, their style can’t be easily labelled and fits several boxes. Shifting from fundamental Speed Metal to Thrash outbursts with Power Metal vocals, "If At First You Don’t Succeed" incorporates many progressive and rocky parts that is remarkably blended in a way only HADES can do. Their songwriting jumps from break to break. Some arrangements with some unusual riffing sound pretty daring and not that brutal (aggressive and up tempo) but the class of HADES and especially the intense and fingerlicking drumming duty by Tom Coombs saved the whole. Still, the vocals done by Alan Tecchio was hard to digest and I lost it many times. Seemed like I could follow the music but the vocals made me think I didn’t understand it at all. Still, it’s a remarkable release with a clash and high level that justifies a reissue. On the more Thrashy tracks like ‘M.E.S.’, ‘Decline & Fall Of The American Empire’ everything fitted together though. The bonustracks are probably from a promo or unreleased EP and would later be featured on regular albums: ‘Decline & Fall Of The American Empire’ ("$aviour$elf"), ‘Biocaust’ ("Damnation"), ‘Force Quit’ ("Damnation"), ‘Hoax’ ("The Downside"), ‘Responsible’ ("The Downside") and ‘The Me That Might Have Been’ ("The Downside"). The sounds is a little more rough and they fit well as a bonus. Between all the heaviness today, this sounds rather fresh and since this is historic, I advice you to check www.myspace.com/hadesusa, www.danlorenzo.net, www.cyclone-empire.com (better check: www.metal-recycler.de).