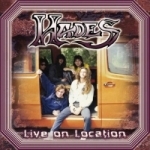 Another reissue of this live album originally released back in 1991. Let me state straight away that I’ve never been a devoted HADES fan because their first single releases from wayyyy back never captured my attention so I’ve always passed on this band and it wasn’t until the 2000s as they had "DamNation" released that they finally caught some of my attention. So I’m kind of new to their music and "Live On Location" seems to be the right recording to discover what HADES were all about really. For those who don’t know, this live album was recorded at a point when the band wasn’t around anymore back in 1990 or 1991 during one of those reunion gigs they were doing from time to time. 13 tracks in total dominated mostly by Alan Tecchio’s unique tone and Jimmy Schulman’s bass work, the dude fuckin’ slays here. HADES’ Heavy Metal approach wasn’t really your typical one, certainly because of Tecchio’s vocals for a good part (another example of ‘love ’em or hate ’em’ situation here) but also because they were covering a large field with their brand of Heavy Metal. Jumping from standard yet quite effective classic Heavy Metal (‘The Leaders?’, ‘The Cross’, ‘Nightstalker’) to silly happy / moshing bullshit (‘King In Exile’, ‘In The Meantime’), then going thru semi technical effective material like ‘Rebel Without A Brain’, ‘I To Eye’ or unto semi Speed Metal raging classics such as ‘Opinionate!’ and ‘A’. The majority of the songs turn out to be enjoyable which is a great thing when you review such an album. There’s six bonus songs with this reissue captured live in the studio, interesting stuff if you ask me because it showcases some other aspects of HADES material, dominated by a progressive approach, but also a doomy one at times such as it appears with ‘Deter My Nation’, ‘Not A Part Of Your Life’ (you said Scott Jeffreys?! Tecchio sounds totally like him here!) or with ‘Gamblin’ With Your Life’. The album ends with ‘Beté Noir’, a total Power Metal scorcher and possibly my fave tune of ’em all. Definitely a good release, it’s just too bad the band wasn’t capable to write just total scorchers in their chaotic history. www.myspace.com/hadesusa, www.danlorenzo.net, www.cyclone-empire.com