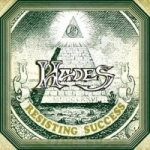 Cyclone Empire Records presents HADES’ debut, re-released with 5 bonus tracks. I guess "Resisting Success" (originally released in 1987) was out of print and in demand after HADES reformed for some shows last year, so for those who lost their copies or for new fans this is a good chance to grab some original 80s Speed / Heavy Metal. I was thinking quite hard how to tag HADES as they obviously were in their own world which was quite different from prevailing typical Thrash Metal when this album first came out. "Resisting Success" has a bit of everything and really is a mish-mash between Heavy, Thrash and Speed Metal with a touch of Hard Rock melodies thrown in for a good measure. The high pitched vocals and very expressive singing style of Alan Tecchio made them stand out from the crowd as well, even to the point of being annoying, as he sings A LOT. Thinking of closest comparisons I would name TOXIK or PARADOX, but really HADES is one of those bands who are original, like say SANCTUARY. They make their own stew incorporating different Metal genres, albeit leaning towards traditional and melodic stuff. Looking back you can see that their best work was still ahead of them and from this quite raw debut I could mention ‘Nightstalker’ for being damn catchy and fastest of the bunch and ‘Masque Of The Red Death’ for its progressive / technical display, but on the whole it seems that the band was still looking for the direction or maybe each member had a different vision as to how HADES had to sound, so "Resisting Success" feels a bit disjointed. Still for the fans of the band this is a real treat with 2 remixed tracks – ‘The Leaders?’ and ‘Nightstalker’, plus 3 bonus songs – ‘Gloomy Sunday’, ‘Easy Way Out’ and ‘Sledgehammer Press’. I found it an interesting ride down the memory lane, but I won’t be staying there long. Info: www.myspace.com/hadesusa, www.danlorenzo.net, www.cyclone-empire.com