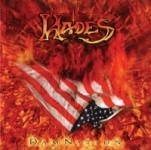 Long before Norway’s HADES (HADES ALMIGHTY nowadays) entered the scene, this New Jersey based five piece had already delivered two all-time classics by the name of “Resisting Success” and “If At First You Don’t Succeed” in the mid eighties. Unfortunately they split up after that, singer Alan Tecchio joined WATCH TOWER and later on ended up in NON FICTION along with former HADES guitarist Dan Lorenzo. NON FICTION musically never ever managed to impress me in any way, same goes for all of the HADES releases that came out after they decided to reform. Except for a handful of good songs, the majority of the compositions still had this rather annoying NON FICTION overtone in it and was far away from the technical and extremely unique Thrash they originally got known and worshipped for. But with “DamNation” they FINALLY released an album that could’ve been the worthy follow-up to “If At First You Don’t Succeed”. Alan is finally screaming his lungs out again in his charismatic and unmistakable manner and there’s several very intense and pretty fast (speak old SLAYER-esque!!) Thrash songs on here, which I hadn’t expected from them anymore at all! Brilliant! Ok, not all of the twelve tracks are of this quality (a couple – mainly the slower one, are still kind of average) but the majority is definitely worth to carry the HADES moniker on the album’s sleeve again. I just hope they will end up writing more of these killer tunes in the future!