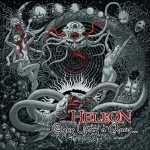 Already the fifth album from this Ukranian band, formed back in 2005. Their style is a mixture of Death and Thrash Metal. There are a lot of references to bands like SEPULTURA, SLAYER, KREATOR, SODOM and later DEATH. The production is really well done for the music style and the execution is also very good and powerful. Still one thing is left, the impression that this has been done before. It recalls that 90s era a lot when Death Metal was trying to be more accessible to the masses. And that my friends, was a big mistake back then and so it is today. Yes we can appreciate the effort made here, and it sounds like what will come after “Arise”, and yes, it has very good moments. In a way it reminds me of what KATAKLYSM is doing lately, something well recorded and performed, but it needs much more than that. Andreas Kisser provides a solo in one of the songs here, and it fits the style quite well. In fact, this is way better than anything his band has done in the last years. But still, something is missing. www.hell-on.net, www.facebook.com/hellonofficial, www.facebook.com/ferrrum