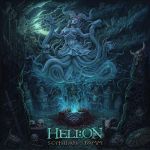 Let me first start off by saying the artwork for the cover of the sixth full-length “Scythian Stamm” is fucking beautiful. If this doesn’t catch people’s attention, then not much will. The Ukraine’s HELL:ON has been around long enough where I’d imagine their fans would listen to the new album regardless. Since their first demo in 2005, the boys from HELL:ON (or HELLION) have consistently written and released new material. There’s just a hint of Greek Death Metal lingering in the depths of the guitar sound, with its almost mythological vibe entrenched within. The album opens with ‘Spreading Chaos’, with its riveting guitars, warlike vocals and drums that have just a tinge of more modern-sounding bands such as HIDEOUS DIVINITY. The production isn’t bad, but comes off a little flat. The energy and power could be turned up a notch. ‘The Architect’s Temple’ is a battle between guitars and drums, alternating in machine-gun shots at each other to eventually join in a steady Metal fury. ‘Ashes Of Gods’ and ‘Under The Protection From Beyond’ have that sort of later-years ROTTING CHRIST thing going on. ‘Movements Of The Godless’ will bring you back to an ancient civilization, but with kings crunching their guitars in front of the peasants. The album moves on with ‘The Denial Of Death’, ‘Whispers Of The Past Yet To Come’ (with a slight nod to HOUR OF PENANCE whether intentional or not) and ‘Roaring Silence’, all pretty consistent in their delivery to the feel of the whole album. Is there a mouth-harp in ‘B.S.B.’, by the way? Anyway, ‘My Testament’ clears the path to the end of the album in a riled-up song that ends on a high note. Overall, “Scythian Stamm” is a pretty satisfying album. The instruments could be mixed a little more open to capture the full energy of the band. But otherwise, it’s a good solid delivery 15 years after their initial beginnings. They might not take the Metal world by storm, but they won’t disappoint either. For more information, check out www.facebook.com/hellonofficial