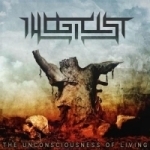 From Aosta, Italy, come ILLOGICIST whose 3rd studio album in order, "The Unconsciousness Of Living", is – to put it simple, just amazing. Actually you don’t have to read this review any further than this. Just do yourself a favor and order this record from somewhere as it’s definitely one of those records that’s truly worth your time… seriously, I mean. ILLOGICIST play technical yet very prog-ish Death Metal, in which some of the best sides of ATHEIST, Canadian OBLIVEON (especially the "Nemesis" album era) and DEATH’s later era (the "Individual Thought Patterns" and "Symbolic" eras in particular), are tightly tied up together. Now when there’s no Chuck Schuldiner and his DEATH to continue the band’s world enslaving with their unique and progressive Death Metal, Italian ILLOGICIST are probably the best candidate for that purpose; so sharply and precisely they do follow the legacy Chuck left to this world on DEATH’s couple of last albums. The riffing, unique harmonies, catchy time signatures, all tasteful lead work, very audible and tricky bass sections – just everything, reek of all those things Chuck did with DEATH in his later times. Even vocals of Luca Minieri, remind me strongly of Chuck’s vocal work on both "Individual Thought Patterns" and "Symbolic" albums. ILLOGICIST sort of give a feeling like their main purpose was just shamelessly show to everyone how well – and first and foremost deceptively, the whole band can do their own DEATH imitation, with the musical abilities they have. There’s actually not a slightest second when spinning this disc through that would allow one to forget all these comparisons to DEATH’s later era. No, there really isn’t – and if the ILLOGICIST camp’s main idea was to show their sincere tribute to Chuck on "The Unconsciousness Of Living", then they have done one hell of a job, I think. It’s impossible not to enjoy this record fully, unless those fair comparisons to DEATH turn out to be too much for you to handle. I can only say – to hell with all those comparisons, ILLOGICIST are a fantastic band, and deserve immediate attention and support from each of us. Now where the heck I left my credit card…? www.illogicist.com, www.willowtip.com