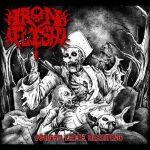 IRON FLESH, a Death Metal band from France, delivers its debut album after having previously released two EPs. "Forged Faith Bleeding", with its beautiful anticlerical cover artwork, contains old school Death Metal, a bit in the vein of the old Swedish masters. In fact, the guitars sound amazingly like ENTOMBED’s "Left Hand Path". Listen to the beginning of ‘Ripping The Sacral’, for instance. The band does strive to have an own sound and it shows. They are often more melodic than might be expected at first, such as in ‘Celestial Disciple’s Incarnation’. Some songs are more typical Death Metal like the excellent ‘Red Sky Aeon’ but in ‘Harbinger Of Desolation’ or ‘Stench Of Morbid Perversion’ they even flirt with Doom / Death Metal. The ambiances created are quite impressive and there were plenty of listening moments when I thought "Well done!". There were other moments in which I couldn’t help thinking that the vocals, however suitably brutal, tended to be on the monotone side; a more varied approach would have added more depth, from my point of view. Even if there are other moments with such depth… ‘To The Land Of Darkness & Deep Shadow’, a particularly musical and well-achieved track, begins with the vocalist actually singing! "Forged Faith Bleeding" is a well-performed album that demonstrates a Death Metal band striving to find their own voice in a saturated milieu. And it is a promising debut! There is much to hear in this release for a Death Metal fan, so go hear some at www.facebook.com/ironflesh, www.epictural.fr