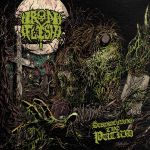 Usually the term “iron” is connected to traditional Heavy Metal, but in this case the listener awaits traditional Death Metal. And a nice and enjoyable piece of Death Metal. Originally started as a one-man band in the year 2017 IRON FLESH is a quartet by now. They already released two EPs, one full-length and a live album. Quite much for the short period of three years. While the band’s name tends towards a conventional direction, the title of album number two sounds more like some kind of gore infested Death Metal, but again the words are misleading. Instead IRON FLESH are heavily influenced by the typical Swedish HM2 Death Metal. At some moments very melodic, bordering the realms of melodic Death Metal like IN FLAMES (of course their early works) and AMON AMARTH (without the Viking Metal elements). So far, so good. What simply does not work for me are the two slower played songs, namely ‘Demonic Enn’ and ‘Cursed Beyond Death’. Two tracks without focus, they never reach the heaviness of ASPHYX nor any epic moments are created. Fast played Death Metal, that’s what IRON FLESH are executing best and hopefully the band from France is concentrating more on that style. Or at least try to improve the slower songs, the last track ‘Convicted Faith’ shows up with some reminiscences of ‘Lost’ by EDGE OF SANITY from the “Spectral Sorrows” album, so the cat is not yet completely out of the bag (or the horse out of the barn). Worth a mention is the cover artwork, done by an artist calling himself Skadvaldur. A bit more colorful than the usual black and white stuff. So whether horse or cat, a good album anyway! So visit the band or label page at these places: www.facebook.com/ironflesh and www.facebook.com/greatdanerecords.